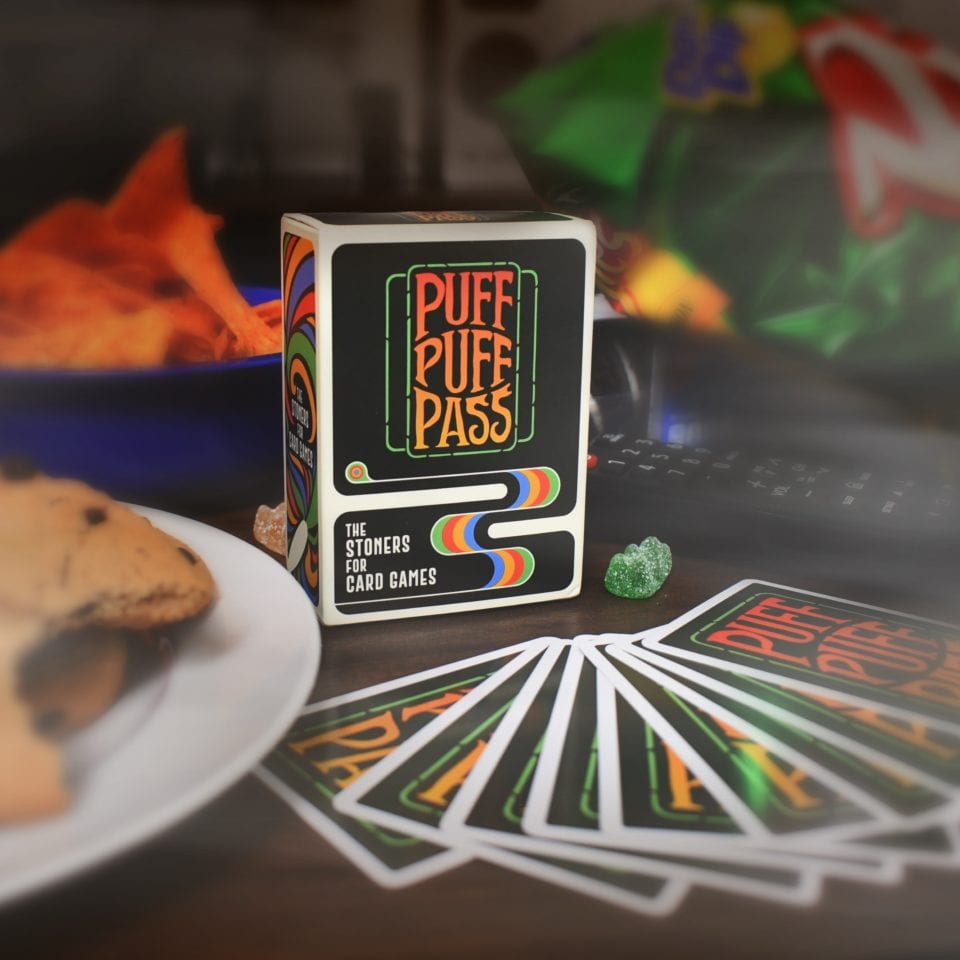 When it comes to hosting a fun smoke sesh for a group of friends, party games can be a reliable way to keep things interesting and the weed burning. And while just about any game suitable for several players can fit the bill, one that actually has a cannabis theme can make the enjoyment of both even better.

Enter ‘Puff Puff Pass,’ a card game made by stoners for stoners.

“Puff Puff Pass is the stoner game that you’ve been needing to elevate your next smoke sesh,” proclaims the website for the game. “No more wasting time thinking about what to do. We did all the hard work for you.”

The game relies on trivia, conspiracy theories, and brain-bending questions that will entertain any crowd, stoned or not. It’s easy to learn and offers plenty of opportunities to imbibe your favorite herb, so be sure to re-up before you invite friends over to play.

The deck is made up of 110 playing cards, each of which is essentially a prompt for a deep (or perhaps exceedingly silly) conversation about a variety of topics including, of course, weed. A Trivia card, for example, might ask who was the first person to be prescribed marijuana (Answer: Chinese Emperor Shen Nung in 2727 B.C.).

A twist on the Trivia card is the Bluff card, which directs the player that draws it to create a fake trivia question. If another player calls out the bluff, the player who asked the question is supposed to make a donation to charity. If the players don’t pick up on the bluff, they all donate. This one is tough to pull off if you’re not prepared, so coming up with a fake question in advance can help you sell this card if you draw it.

Truth or Dare cards come in two varieties. Truth cards (such as “favorite conspiracy theory” apply to the group while dares are only for the player who drew the card. Be careful with these. Following directions to “send an email to the FBI telling them how high you are right now” probably won’t result in any repercussions, but who knows?

Would You Rather cards present two choices that are likely to inspire some introspection for the players who draw them, while Debate cards pose a question for the entire group to hash out. Other cards make the players the focus of the conversation, such as Choose Your Character cards that let the player that draws it assign a character from a fictional universe to each player, while the Most Likely To cards direct you to decide who has the best chance of selling “oregano for $30/gram to your 12-year-old brother,” for example.

Other cards test your Memory, while Internet Gems cards share viral videos and the like via a QR code that can be scanned with a smartphone. The last type of card, Puff, invites all players to enjoy a hit. It is a weed game, after all.

Instead of competition, the objective of Puff Puff Pass is a conversation and fun interaction between the players in the group, so there is no scoring or points to keep track of during play. Who wants to do all that when they’re toasted, anyway? Instead, players take turns drawing a card and following the prompt, sometimes with hilarious results. Any number of players can take part.

The lack of competition also means that there is no winner, per se. Instead, the goal is for everyone to have an enjoyable time—while getting high. Play can continue as long as players desire. If someone gets really baked and goes off on a tangent, so what? That’s half the fun.

Puff Puff Pass is available online for $15. A booster pack of 55 additional cards is also available for $12. Pick up a deck before your next pot party and watch the fun begin!

Hemp Bioplastic – All Your Cannabis Products Should Come in Hemp Plastic and Wrapping, Right?

Peter Frampton On Life, Music, And The Highs...

I’ve been experimenting with my own version of...