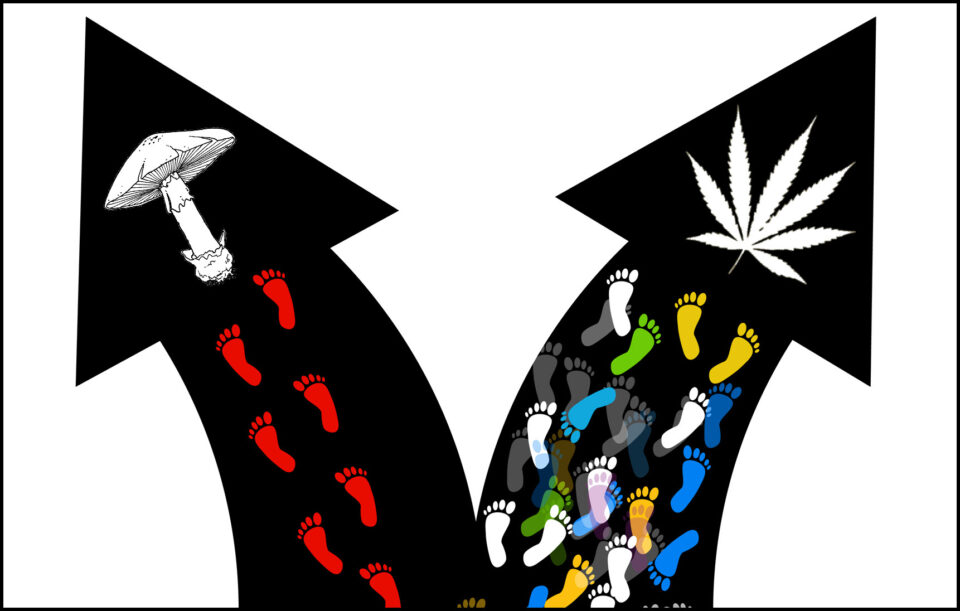 Much like cannabis, the psychedelic sector is gradually growing day by day with different moves being made in the right direction. This has prompted many big investors to make the move into psychedelics. Growing acceptance and decriminalization by the government is also a factor pushing many into psychedelics with a big market ensured. Some big companies in the US are consciously making considerable moves towards the decriminalization of psychedelics. Examples are Revive Therapeutics, Champignon brand, Hollister Biosciences, etc.

Some moves have also been seen in the psychedelics sector which has seen cannabis entrepreneurs make the switch to psychedelics. Bruce Linton, a former CEO of Canopy Growth Corps made the switch to become director of Mind Medicine Inc. He is also the Chairman of the advisory board of Red Light Holland, a company focused on truffles. Terry Booth is another example of a cannabis entrepreneur that has made the move from cannabis to psychedelics. He is the co-founder of Aurora Cannabis who has made the move to Red Light Holland. He is also on the board of Psyched Wellness Corp.

The cannabis sector despite the growing increase and acceptance has been plagued with different issues of regulations. The possibility of some cannabis entrepreneurs growing increasingly frustrated by these regulations can prove to be a reason to make a switch to psychedelics. The regulations surrounding cannabis make it less transparent for most of these entrepreneurs. It also comes with a great degree of legal risk that makes the market unpredictable.

Psychedelics too are not without their regulations. Many psychedelic drugs are either classified as Schedule 1, 2, or 3. MDMA, LSD, DMT, psilocybin, mescaline, and heroin are examples of Schedule 1 drugs. Cocaine, methamphetamine, and amphetamines are classified as Schedule 2 drugs while ketamine is an example of a Schedule 3 drug. This scheduling of these psychedelics further makes the process of producing them more complex. There is a need to obtain a license for production, storage, and any form of work to be done with such products.

Despite these restrictions, psychedelic drugs take a short time to be produced. This is largely because the sector is strongly driven by academic and scientific research. With more researches being done, more clinical trials can be spearheaded by big pharmaceutical companies. The scheduling of some psychedelics is not uniform internationally which has allowed some psychedelic companies to list their companies in other countries. Canada for instance classifies LSD, DMT, mescaline, and psilocybin as Schedule S drugs is why some biopharmaceutical companies are listed in Canada.

Psychedelics have a market size that estimates as high as $100 billion. This is a huge incentive that can serve as a major attraction to entrepreneurs. With such a burgeoning industry, it is understandable that some young cannabis entrepreneurs may be seeking to switch to psychedelics. Such investors will come out with patentable products and a market with a definite strategy for continuous reimbursements.

Many cannabis companies have focused largely on the recreational market leaving the therapeutics for big pharma companies. This provides room for psychedelic companies to fully colonize the market. Many psychedelic companies have made the most of these in recent times. Examples are Janssen which has developed Spravato, a ketamine-based drug approved by the FDA for use against treatment-resistant depression. With over 264 million people suffering from depression globally and a good amount suffering from treatment-resistant depression, a large market is on the cards.

18-MC is another revolutionary drug based on psychedelic ibogaine produced by MindMed for opioid addiction. There are other public and private psychedelic companies that are making the most of this wide market to make sufficient strides. With lackluster sales on some pharmaceutical cannabis fronts, it is then understandable while some may want to change ship to psychedelics.

Psychedelics have not suffered much of the stereotype and political attack placed on cannabis over the years. This has allowed many to play down the therapeutics of cannabis and its usefulness. Psychedelics, on the other hand, are more acceptable to some which has helped increase their medical impact. they are effective for dealing with common mental issues such as depression, anxiety, PTSD, and suicidal thoughts.

The FDA is also known to be more open to fast-tracking approval and clinical research trials for psychedelics compared to cannabis. This means that more people are prone to benefit from the medicinal uses of psychedelics than cannabis, at least for now. With both compounds being used for common ailments, it is understandable why some investors in medical marijuana can easily switch to psychedelics. It currently provides the allure of a bigger market meaning more potential market and more medical impact.

It is still too early to say for certain whether more cannabis entrepreneurs are going to make the switch to cannabis. The allure is there and so is the gain to be made. However, this gain is not as definite as it is currently made out to be. The business of investing when it comes to such sectors is a long game which means there are different factors that can affect eventual outcomes. Regulation is currently the major factor for cannabis and psychedelics and where it tilts to determines what can be expected. It is advisable that cannabis entrepreneurs take their time before seeking to switch from cannabis to psychedelics.