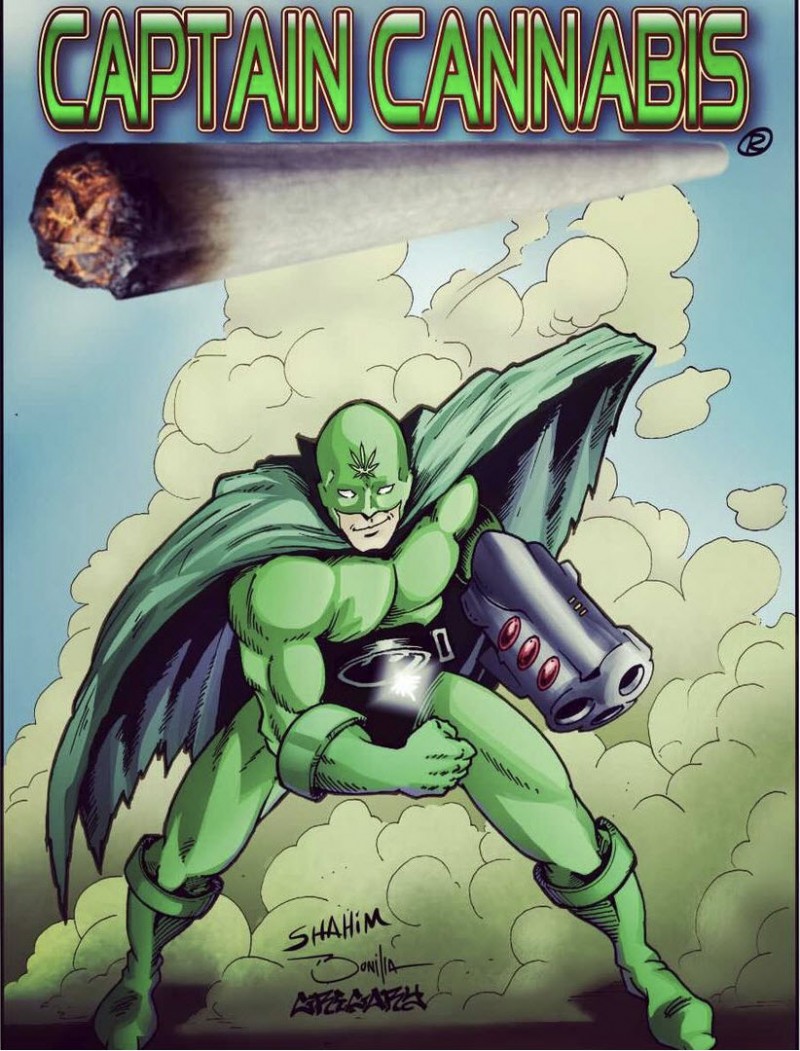 Cannabis is so much more than just a natural herb used for its euphoric effects. It is more like a conscious part of the modern culture and this is evident in the growing acceptance of the herb. Do you know that cannabis has its superhero known as -Captain Cannabis?Read on as we explore the first weed superhero!

The first sketches of the character were said to be made in 1975 by creator Verne Andru. Prior to that time, despite the popularity of comics and cannabis, no other character had been sketched for the herb. Verne a Canadian illustrator credits the creation to a period of time when things in Canada were largely influenced by events in the US. He was inspired by legendary comic masters like Robert Crum and Gilbert Shelton who worked on Zap Comix and The Fabulous Furry Freak Brothers respectively.

Growing up as a kid, Verne initially wasn’t a fan of comics. He didn’t find much appeal in the fact that they glorified violence. However, this view changed when he came across a pile of comics in a headshop in the ‘70s. This was also around the time such stores played host to stoner materials and materials against cannabis. Advocates on both sides had a voice and on the voice of the cannabis counterculture, the Canadian government gave a recommendation in 1972. This recommendation by the Senate was for the decriminalization of cannabis and with the likelihood setting in, Captain Cannabis came to light.

The comic and the superhero

The first issue of the Captain Cannabis comic was published during a unique time in the history of cannabis in Canada. The beauty of comics was reaching a new high of acceptance in 1975 and the push for legalization reaching a tough point as well. The creator then thought to place the setting for Captain Cannabis in a post-prohibition world. This ultimately removed the antagonistic elements such as law enforcement and created a possible projection of the future. A future where cannabis wasn’t seen as a menace but readily acceptable by all.

The peculiarity of Captain Cannabis made him acceptable to all. Well, those in favor of cannabis legalization at least. It was an instant sensation and it seemed like it will be around for a long time. The people were receptive to the comic and it received a great ovation with a good distribution network both in and out of Canada. However, tough times were about to set in for Verne and Captain Cannabis.

The famous period of the War on Drugs in the US came after President Richard Nixon of the US set up the Drugs Enforcement Agency (DEA). President Ronald Reagan built on this agency by declaring a full war on drugs, a classification that cannabis fell in. Pierre Trudeau was the Prime Minister in Canada during this period and he faced pressure from the US regarding border closure. Canada at that time had a freer climate for cannabis compared to the US and this was seen as a problem by the US at that time. The US sought to tighten restrictions between the borders between the US and Canada, a move that put both countries in a tough spot.

Who is Captain Cannabis?

Every comic superhero has unique ideals and specialties. The central story around Captain Cannabis sees a random man who loves cannabis turned into a superhero by an intergalactic weed strain. This superhero is tasked with the responsibility of saving the earth from itself. He helps people by keeping them from being mean to each other and promotes good social ideals.

Verne said he spent quality time with people in the cannabis culture while working on developing the comic. Due to the relaxed feeling promoted by CBD, many of them were always relaxed, calm, and reluctant to fight. This served as the basis for making Captain Cannabis a superhero that teaches people against fighting and being jerks to each other.

The core basis of Captain Cannabis is that he promotes love and peace in the way of a stoner. He has all the makings to be a bigger star than he already is. The present market of cannabis around the world creates a better room for the superhero compared to when the first issue was published. Andru’s books are available for sales in different places in the world. This means that the reality of a post-prohibition world that Captain Cannabis lives in is slowly becoming a reality.

Should we be expecting more comics for Captain Cannabis?

The cannabis-themed hero is much more than a comic and the creator also identified that. Verne had earlier experimented with a web series for Captain Cannabis. With several ideas set to be in the works by the creator, rumors of a movie have surfaced. His YouTube channel also points to the possibility of a movie in the nearest future for the superhero. There are different animation concepts that would be perfect for a movie.

Verne has already turned down offers in the past to make low-budget movies of the cannabis superhero. He maintains the two original stories of Captain Cannabis available now named Roll Me Another One and Roll Me Another One Just Like The Other One. He is said to have penciled down the drawings for a third comic which should be entering the finishing stage soon. This means that Verne is far from done with Captain Cannabis and we should be expecting something great pretty soon. A movie might also not be too far away. Provided all the necessary factors align, we might see Captain Cannabis hit our screens soon; and wouldn’t that be awesome!

Family Business is a comedy about a failing...