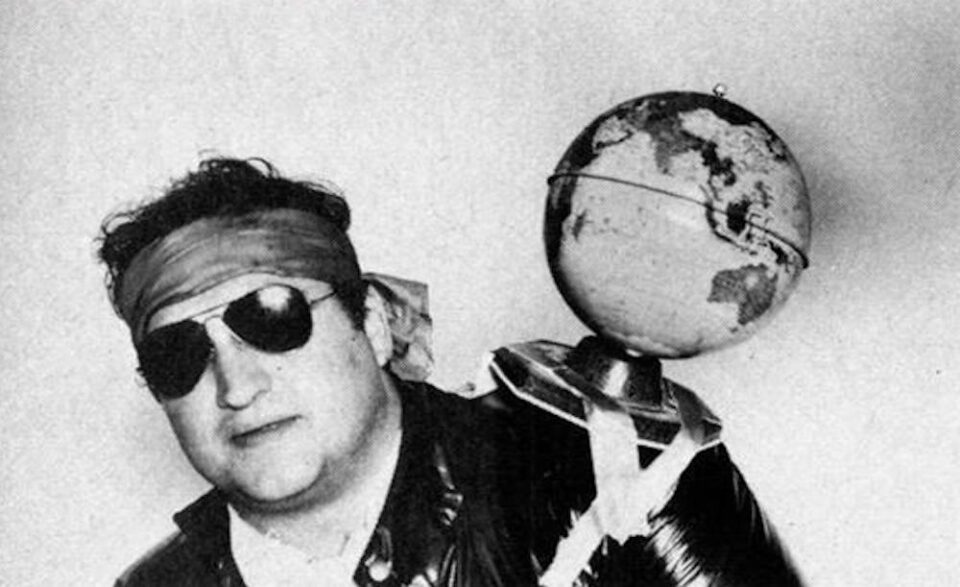 From the man known simply as “R” aka the Connoisseur comes a May, 1982 tribute to the late John Belushi, who would have been 72 on January 24.

Let me tell you about two strange encounters the Connoisseur had with the late great John Belushi. And something about a dream he had that hasn’t appeared in the pious postmortems.

The first meeting was a riotous evening financed by High Times. The magazine was putting Hunter Thompson up at a weird but hip hotel in lower Manhattan for a High Times interview. Thompson had made several demands as conditions for doing the interview, one of which was that High Times use its influence to make the best drugs in the Western Hemisphere available to abet the interviewing process, not just for Thompson but for a couple of his friends. The friends turned out to be Belushi and Aykroyd and the interviewing process turned into a three-day intensive party which shifted back and forth from hotel room to various restaurants around town.

In the course of the interview, it became apparent that Belushi was quite the aficionado of grass. Although other substances were consumed, although Belushi would occasionally disappear into a restaurant men’s room and return in a chemically altered state, although my memory of all the discussions that evening (including an intense three hours of watching a pro basketball playoff that resulted in certain items of furniture being set ablaze in the poorly ventilated hotel room fireplace) is definitely impaired, I do recall smoking a lot of good grass with Belushi and getting the impression he was extremely knowledgeable about the subject. Almost as knowledgeable as the Connoisseur himself.

The next time I saw him I was emerging from the High Times office and he was heading up Park Avenue in a cab. When he saw me he got the driver to screech to a halt, tying up traffic. He told me to climb into the cab and produced a joint of something he called Humboldt County purple, which we proceeded to smoke on a long, stalled crawl through rush hour traffic.

Well, it was rush hour inside the cab after that. Humboldt thunderbolt got burning. We had a long discussion about the virtues of California purples as opposed to Hawaiian purples. We reminisced about great grass experiences of the past, and I could tell that Belushi approached smoke with the same wonder, delight and sense of discrimination as the Connoisseur. He didn’t talk about grass with that stereotyped Bluto-like, let’s-get-wrecked attitude, but with a sense of the subtleties and distinctions among the highs that marks connoisseur consciousness.

And so, feeling I had a kindred spirit, I revealed to him my secret identity as “R.,” the High Times Connoisseur, and got from him the kind of surprise and awe I get from most of my devoted fans out there.

I just happened to have some very special Punta Roja rolled up. Genuine primo redbud, rich and ripe, heady, dreamy stuff. As the traffic got thicker and we got higher, Belushi started to tell me about his dream movie. It would be about the whole outlaw marijuana culture that changed the consciousness of America. Belushi was fascinated by the mysterious workings of grower-smuggler networks, the anonymous heroics of underground grass superstars, the ones who moved whole mountains of marijuana on air, land and sea to fill the eager bongs of America.

Belushi wanted to give these daring captains courageous of consciousness the credit they deserved, he told me. He wanted to star in a major marijuana movie to be called Kingpin. He wanted to play the title role.

In some ways this movie might have turned out to be Belushi’s tribute to people who made his meteoric rise to High Priest of a generation’s Saturday nights possible. Because if it had not been for those merchants and medicine men who made marijuana a Saturday night rite, the kind of cannabis-tinged comedy the Not Ready For Prime Time Players specialized in would not have become the powerful cultural phenomenon it was, and Belushi would have been just another struggling bit player in a suburban improv troupe.

But I sensed the movie idea was more than a tip of the hat to the people who helped him on the way up. It was a tribute to the pure pleasure he got from smoking grass. Say what you will about his alleged indulgence in coke and other chemicals. This was a man who loved grass best. He told me so that afternoon during our taxicab seance on the subject. It’s too bad, in retrospect, he got sidetracked by other substances. People smart enough to stick with good ol’ grass and not get heavily involved with white powders seldom OD on their pleasures.

Belushi’s dream: that, too, kept getting sidetracked by certain other turkeylike projects that were “safer” by Hollywood standards and so Belushi died without getting to make the movie that might have been his greatest. Imagine camera-trekking through the upland Colombian forests and coming into a clearing, where ensconced in the total luxury and decadence and bliss that only a powerful combination of strong marijuana and much money can create, the Kingpin reigns over his vast marijuana growing lands and the fleets of planes and boats of tea-toking titans that brought him to that eminence, the many mansions in Florida and Hawaii he inhabits, the final global struggle with the straitlaced forces of repression. A global Animal House, if you will.

In fact, the most fitting tribute our culture could pay to Belushi would be to finally make that grand grass movie the right way and make his dream come true.

For Comedian Alonzo Bodden, Home Is Where The Stage Is

When They Tell You To Add More Greens...