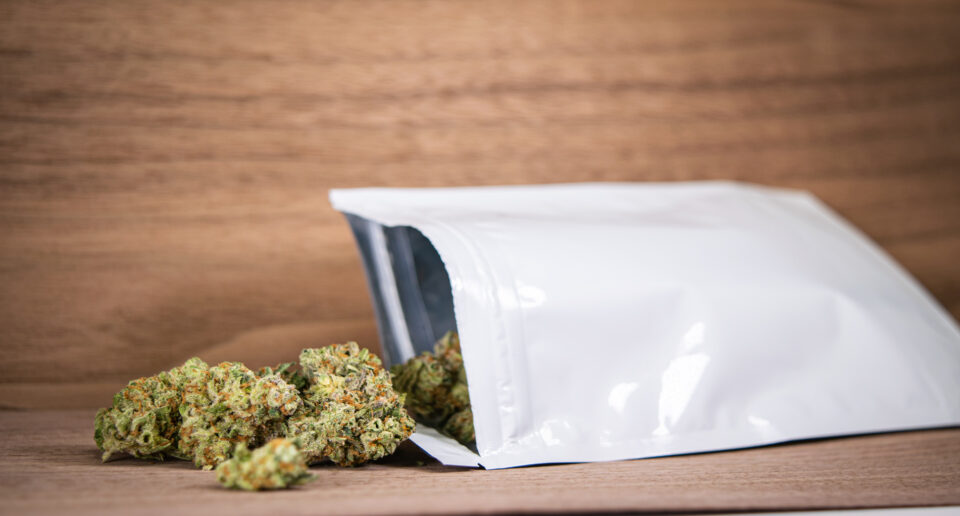 Finding a sealed bag of fresh cannabis on the road would usually be grounds for “finders keepers” and an impromptu smoke session. But for Seattle’s Chase Burns and his partner Mark Castillo, it was an opportunity to solve a mystery and help a stranger who’d already had quite the day.

As Castillo was walking with his bike to his office in the city’s Capitol Hill neighborhood, he watched a bike messenger swerve to dodge a passing car. In the near-miss, the messenger seemed to drop something to the curb. Hard to say what it was. It was dark. Castillo investigated.

Turns out it was a sealed quarter-ounce bag of premium cannabis flower.

By the time Castillo collected the bag from the gutter, the bike messenger had sped away and out of sight. So he took the bag of treasure home to Burns.

“I walked out of the room and there was a big bag of weed on the table,” Burns later told Leafly. “I was like, When did you pick up weed?’”

When Burns learned about the peculiar origins of the cannabis, he initially considered smoking it. Then he thought twice.

“I felt bad because there’s a lot going on [in the world], and I already have weed, and this is a big bag of weed,” Burns recalled. “I thought I’d Tweet it, not really thinking I would find [the owner], and then I thought I’d give it two days and if no one responds in two days I’ll smoke it.”

Meanwhile, a few miles away, Nick Panchot was recovering after spending most of the day searching for his bicycle.

It had been stolen earlier that afternoon outside of his partner’s house, while the two shared lunch and took the dog for a walk.

“Within 45 minutes of walking the dog, someone had come along and ripped out the ‘No Parking’ sign, slid it up through my U-lock and banged it against the tree and took my bike,” he recalled.

Nick Panchot makes his living as a bike messenger. So this theft wasn’t just an inconvenience. It effectively put him out of a job.

Got to calm yourself before searching

In his distress at having lost his basic means of wage earning, Panchot decided to put the word out about the bike on social media. Then he headed out searching for it himself on his partner’s bike, but not before stopping at the dispensary to get his favorite sativa strain.

“I had decided, you know, it’s worth [it to] put together another bike with pieces that I have and my partner has, and [go] buy some weed right now,” said Panchot. “I was like, I just need to go buy some weed to handle this.”

It was on his way back home from the dispensary, as Panchot was riding his new makeshift bike over the Interstate 5 freeway overpass, that a swerving car almost hit him and the quarter-ounce of Lemon Meringue fell out of his hoodie pocket.

Caught up in the search for his pilfered bike, Panchot never even realized he’d lost his cannabis.

An army of messengers scour the city

Bike theft is far too common, and it’s maddening because a bike can cost as much as a used car but stolen cars are often found and returned while bicycles usually aren’t. Cops can’t or won’t do much about a bike theft. The sleuthing is up to the owner. So Panchot got to work.

“My friends were on high alert, as were other messengers in the city who saw posts I made on Instagram and Facebook,” said Panchot.

The hue-and-cry produced results. Panchot’s friend spotted his stolen bike “in a location,” Panchot later recalled, “that bike thieves like to take bikes that they steal.”

The thief had covered it up and hidden it with jackets. Panchot and two friends met up to “negotiate” the return of the bike, “when my friend Justin, who was on his way to meet us, apparently just swooped in, grabbed my bike, and rode off with it.”

The rear wheel was damaged slightly in the rescue operation, but everyone made it out unscathed.

Dude, is this your weed?

On the way back to his partner’s apartment with his recovered bike, Panchot got a message from a friend who’d seen Burns’ Twitter post.

“My friend Cory, who owns a bicycle repair shop, DM’ed me on Instagram saying, ‘Hey, was this your weed?’”

Intrigued, and unable to locate the weed he thought he’d left at his partner’s house, Panchot messaged Burns on Twitter with the name and strain. Lo and behold:  It was his 7 grams of Lemon Meringue.

Reunited and it feels so good

Panchot arrived to pick up his weed around 9:30 that night. “He showed up at the apartment and like ripped it open and gave me two huge handfuls,” recalled Burns. “He really likes that weed.”

Panchot definitely does. He calls this particular strain, grown by Narrows in Tacoma, the perfect sativa: “Lid-droppingly stony, not the least bit lethargic, and super effectively anxiety relieving.”

Not Your Grandfather’s Cannabis | Medium

how do I make my family understand cannabis...