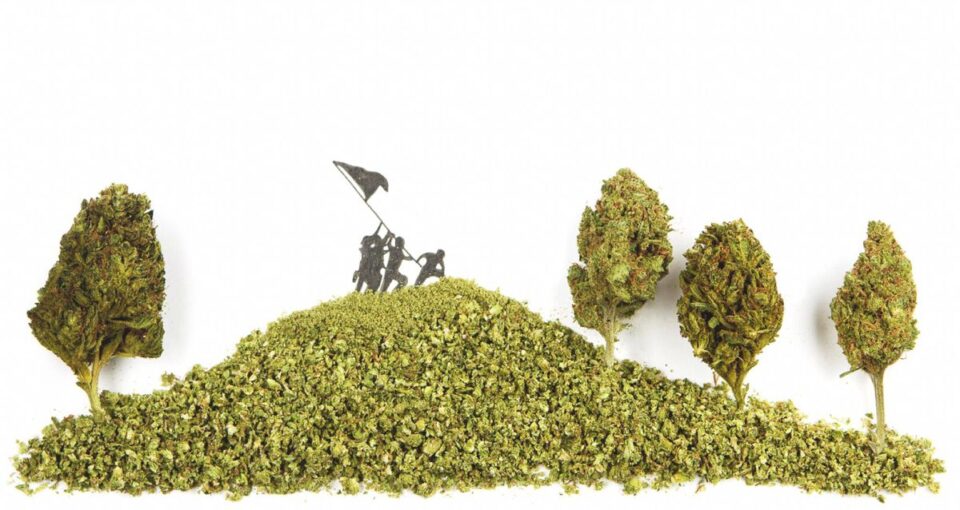 If you are into cannabis or music, it’s more likely than not that you’ve unknowingly seen Greg Welch’s art somewhere.

Under the Cannabiscapes acronym, the young creator has produced hundreds of art pieces using ground cannabis flowers and other related products for everyone and their grandmothers. From art galleries, to stores, to album covers, Cannnabiscapes have become a must-have for cannabis aficionados.

But, how did this guy go from having to hide his actual name to distribute his art to becoming one of the best-known craftspeople in the pot world?

According to Welch, much of his success can be attributed to collaboration and bartering. No ego was involved in the process: just a desire to get his art out to the world.

“People at shows that would have new items for the cannabis industry and I would offer to trade. I’d make some weed art, post it up on my Instagram account, and get something cool for my archives. Win win,” he said during a recent interview.

And his good will paid off. Four years later, Greg is working with many of the companies he collaborated with early on in his career.

Now, let’s rewind for a second: where did the idea of making art with marijuana come from?

Putting The One Hitter Before The Blunt

Greg wasn’t a cannabis consumer as a youngster. In fact, he fist started consuming it in his 20s, when he moved to South Florida and fell in with a group of people he defines as “successful hustlers.”

“All were responsible and smoked weed so I figured it couldn’t be all bad,” he voiced. “That was really the start of me consuming and recognizing the connections that cannabis creates.”

A few years later, Greg decided to look for a job in the cannabis industry, landing a sales role for a track and trace software company.

He recalls hundreds of cold calls he had with West Coast and Colorado-based companies, and the subsequent opportunity these contacts generated. He was travelling all around the country, meeting cannabis industry pioneers, making friend and business connections, getting to know the space.

“That really showed me that I was in right space with the right people,” he said.

And it was around that time that he started making weed art and created the Cannabiscapes Instagram account.

“I was thinking about who I’d want to smoke weed with and what the best way to make that happen would be. My solution was to make their faces out of weed,” he explained.

In his mind, no other figure in the world said weed more than Snoop Dogg. So, he found a reference photo and spent “way too much time shaping it into, in retrospect, a pretty awful rendition of the Doggfather.”

Ultimately, his goal was to create pieces that people appreciated prior to, or without ever knowing, that they were made out of pot. And, he felt, that first trial did not make the cut.

“My goal is to create something that my 85-year-old grandmother, who doesn’t like weed and doesn’t really like what I do, would appreciate. That’s kind of the game I play.”

As time went by, Greg perfected his craft. And with it came the public attention.

Things really took off when he made a piece for a Berner album in late 2017.

This was a special moment for him.

“It was not only memorable because of who he is in the game, but also it was my first major project and it immediately put me in front of a huge population of cannabis enthusiasts.”

But, despite the recognition, Greg was not ready to come out of the cannabis closet just yet. He still signed all of his pieces as Ty Forto.

“For a long time I was making the stuff out of Florida and, specifically at that time, it was still pre-medical, so the landscape wasn’t very good for putting my name out publicly for making pictures out of pot,” he explicated.

Beyond legality, Greg was concerned with public perception.

“I was also worried about judgment. And back to location: I was literally living right behind the police station and it was one of those things that…not that I have anything really to hide other than some pot… but don’t create problems that are avoidable, ya know?”

“Now I don’t give a f*ck; I’m all about putting my face and name out there to promote to the right aspects of the industry.”

Making A Career Out Of Weed Art

In the past, this column focused on cool cannabis jobs has looked into the emergence of cannabis art and the viability of making a career out of it. People like cannabis photographer Bentley Rolling, comedian Rachel Wolfson, performance artist Laganja Estranja, or multimedia artist Emily Eizen, are living proof of it.

“I mean, anything can be a career if you do it long enough, right?” – Greg commented when prompted about the issue.

But one can’t make it alone, he added. It’s all about connecting with the right people and establishing authentic, lasting relationships.

“By spending time with some of the people that have pioneered different aspects of the game, or have been in it for a long time, it’s really humbling to see how much they put into what they do and what kind of sacrifices, personal risks, they’ve taken on.”

“There’s definitely opportunities to create a business out of the cannabis art by networking correctly and leveraging those relationships. That’s something that I’m continuing to explore and experiment with, and see which direction I want to go with it. I’m still in an exploratory phase and enjoying the journey. But my mind is always looking at gaps in the market and ways to help the aspects of the industry I support,” he added.

Taking his own advice, Greg is starting a podcast and web series in 2021, exploring new opportunities to create around cannabis culture.

“I get to spend time with so many inspiring people, I feel obligated to start sharing more of their stories. And that’s where I’m looking in 2021, I’m going to start a podcast and web series around the hustle and show people what the real weed game looks like. At least what we’re ready to show, if you know what I mean,” he explained.

For Greg, there’s no slowing down. At any given time, he said, he’s got roughly 10 projects “swimming around” in his head.

“I wanna ride the wave wherever the weed game takes me. Whoever’s got events going on, whoever I’ve recently collaborated on with a logo piece that I wanna drop off and meet in person and sesh, or a pop up at a dispensary… Whatever is going on, that’s what I wanna experience right now because it’s unprecedented, it will never happen again, and I’m fortunate that I get to hang out with some of the best to ever do it.

“My number one piece of advice to anybody seeking to make it as any type of content creator is to provide value before requesting value,” he ended. “What I mean by that is before you ask somebody to part with their hard-earned money, show them how you can help them. So many of my projects have come from me creating a piece for a brand I respect and simply posting it. The right people see and share work they vibe with and that goes a long way in weed.”

Party Time earrings are back #statementearrings