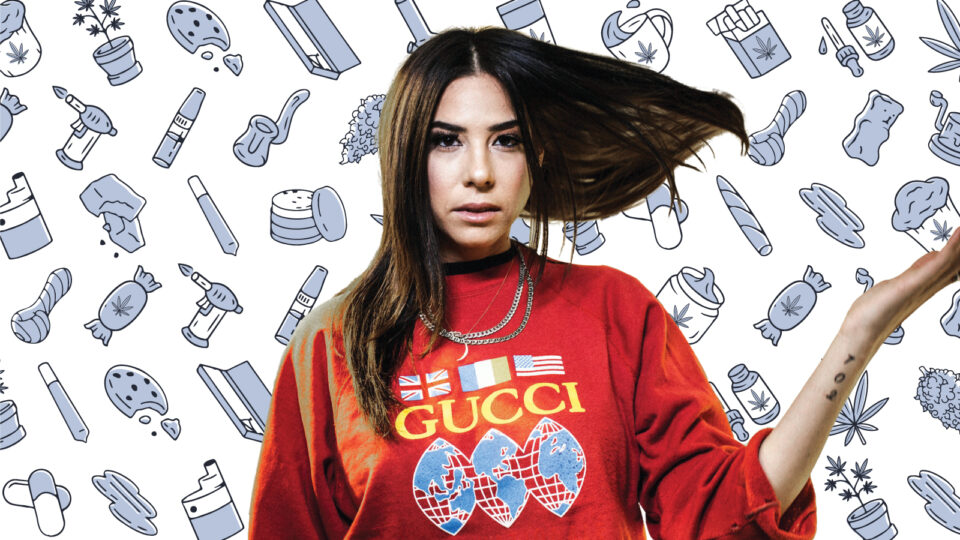 I first learned about Rachel Wolfson’s work through a mutual connection that grew up with her. She encouraged me to reach out to Rachel for an article I was writing about how stand-up comedy was normalizing cannabis. And after watching one of Rachel’s hilarious stand-up sets, it’s easy to see why she’s considered a trailblazer in the cannabis comedy realm. Not only does she advocate for cannabis consumption in an ethical and humorous way, but the backstory behind her love for the plant is beyond heartwarming.

When Rachel was five years old, she was diagnosed with Attention Deficit Hyperactivity Disorder (ADHD) and prescribed a cocktail of Adderall and Ritalin to help treat it. At age 12, the doctors added another diagnosis and ingredient to her already potent combination of pharmaceuticals: bipolar disorder to be additionally treated with Lithium. Rachel’s body and mind did not react kindly to the drugs and she felt helpless — until she discovered cannabis.

The plant instantly made her feel like a better version of herself, but she’s been advocating ever since to remove the “shameful” stereotype around what was once considered a dangerous and illegal substance. A big way she does this is through her stand-up sets, sketches, and overall presence in the LA comedy world.

“I was at a low moment in my life and something inside me told me to do stand-up. Comedy gave me a place to heal, be humbled, and find joy. I love stand-up comedy because when I’m on stage it feels like home, and no matter what I always get what I need.”

As she continues to normalize cannabis use through her comedy and advocacy work, here are several products that leave her feeling like her best and most authentic self.

In less than three years, Kush Queen has grown into a multi-million dollar, multifaceted brand carrying only the finest in both CBD-only, and THC-infused products focused on wellness and accessibility. Their variety of bath bombs contain both CBD and THC, depending upon preference, and one of Wolfson’s personal favorites is the Complete Mini Collection, which is a great way to try the brand’s five original blends.

“I love taking baths after a long day of work or working out and I can truly feel the CBD/THC absorbing through my body differently,” says Wolfson. “I sometimes have trouble sleeping, but when I soak in a relaxing Kush Queen bath bomb before bed, I know a quality night’s sleep is in store.”

“My latest new love are the ROACH vape pens. They’re perfect for outdoor settings and they have a ton of fruity flavors that are delicious tasting. One of my personal favorites is the Clementine Punch. Although the pen itself is small, the hits are so solid. Sometimes you get scared with a micro pen and you’re going to have a micro hit, but not with these guys.”

Royal Key Organics totes itself as being “obsessed with making the richest flavored, pesticide-free, organically fed, small batch, hand-trimmed cannabis on the planet” and they aren’t the only one with an obsession. “I’m obsessed with their M-Con #8 strain,” says Wolfson.

She’s also currently crushing on the 710 Labs‘ Candy Chrome strain that is so “beautiful tasting” that she’s still reminiscing about the taste weeks after she’s consumed it. “I can tell their flowers are grown with love.” Edible wise, she’s currently vibing with the 710 cannabis-infused hash rosin gummi, which is made from cultivar-specific rosin. She also recommends 710’s joints as great birthday gifts, anniversary presents — you name it.

Stigma & Style was founded by three “millennial stoner” friends, who were tired of the “stigma” and ready to wear cannabis on their sleeves. As an advocate who is also never afraid to rock the cause, Wolfson loves the S&S apparel and branding.

She also recommends Blunted Objects, for all of your stoner jewelry needs.

Chloe Detrick is an actress, comedian, and writer living in West Hollywood. She is also the co-host of “Damsels in the DMs,” a weekly podcast that features a letter from someone struggling with an aspect of the modern dating realm and a relevant guest to provide some advice, support, and comic relief. You can stream episodes of the podcast and learn more about Chloe’s other endeavors at http://www.chloedetrick.com/.

South Dakota May Let Banks Choose Whether To...

8 Of The Best Cannabis Strains For Creativity...

From the department of stupid Dutch decisions. No...